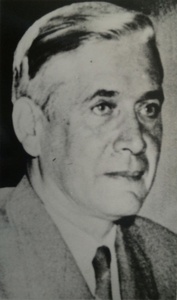 Slavich was born March 27, 1881 in Portland, Oregon and his family moved to Oakland when he was boy. He grew up at at 582 24th Street, and his father, John F. Slavich, Sr. ran the Louisville Restaurant on Broadway. He graduated from St. Francis de Sales Elementary, Oakland High, UC Berkeley, and from the UCSF School of Medicine in 1904.

Slavich was a veteran of WWI, where he served as a captain in the medical corps. He was active in the American Legion, and was was State commander in 1926-27. He was also active in the Elks and Moose Lodges, as well as the Knights of Columbus. Slavich had a medical practice downtown for more than 40 years at 428 13th Street. He and his wife (who was his former nurse) lived at 412 Bellevue Avenue.