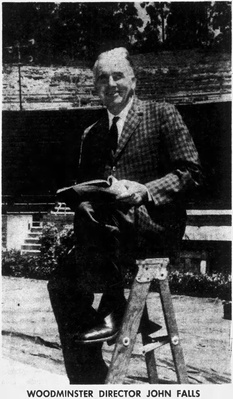 John Mathew Falls, Sr. (October 4, 1897 – April 25, 1983) was the founder and director of the Oakland Light Opera Association, and the original director of the musicals at Woodminster.

Falls was born October 4, 1897, in Plumstead, England, to John Henry Falls and Mary Jane McGerry (Falls). Falls served in WWI in the Queen's Irish Foot Guard, and played soccer (football) for them.

In 1920, he immigrated to the U.S. via Canada, arriving in Detroit, Michigan. There he met and married Margaret Mary George (Falls) (May 1, 1890 – February 20, 1982) of Wyandotte, Michigan. They had 4 children: John Mathew Falls, Jr., Francis "Frank" Joseph Falls, Mary Henriette Falls (French), and James Patrick Falls.

John worked as a singer on the Keith-Albee Vaudeville circuit as part of the "Hicksville Four", and the Falls came to Oakland in 1929. The 1933 directory lists Falls as a manager of a MacMarr Store, but the 1940 census lists him as a music teacher. According to family, he taught drama, public speaking and debate at St. Elizabeth High School.

From 1942 to 1947 with the Victory Players, and then 1951 to 1966 with the Oakland Light Opera Association, Falls was the producing director of the musicals at Woodminster. 2 Margaret designed costumes, and the children were often involved in the performances as well.

The first jazz concert at Woodminster was by the Dave Brubeck Quartet in 1959, and was held thanks in part to Falls. 6

Falls was also director of the Oakland Municipal Employees Chorus, 3 and directed numerous Catholic church choirs. In 1978, he was awarded the Benemerenti Medal by Pope Paul VI in recognition of his service to the Catholic church. 4