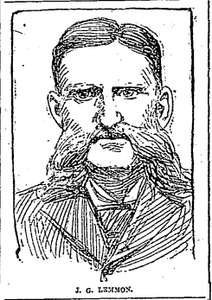 J.G. Lemmon was born in Michigan in 1832. He served in the Civil War and was a prisoner in the infamous Andersonville and Florence. The unit he served in, the Fourth Michigan Cavalry, captured Jefferson Davis in May of 1865, although Mr. Lemmon was by then recuperating from his time as a prisoner of war. 4,5 He came to California in 1866. Lemmon and Sara Plummer met in Santa Barbara in 1876 and were married in 1880. For eight months out of every year, the two worked in the field.

A species of potato plant the Lemmons found in Arizona was named after Mr. Lemmon in 1876. Mr. Lemmon often photographed the plants that Mrs. Lemmon would paint. He was the author of a book "Cone-Bearing Trees of the Pacific Slope" and published in Pittonia.

Physically, he was described as tall and thin with blue eyes and brown hair with a nervous and quick demeanor. 4 When was rescued from Andersonville, he weighed less than 100 pounds, and likely suffered from the psychological effects of war and imprisonment as well, what would be diagnosed as PTSD today. 9 Approximately 13,000 of the 45,000 soldiers imprisoned at Andersonville died.

The Lemmons lived at 5985 (later 5979) Telegraph Avenue, where they developed the Lemmon Herbarium.

Lemmon served briefly on City Council after the death of Charles Kramm, Jr. Mayor Snow appointed him, 7 selecting him from the hundreds of people who clamored for the job. 2

Somewhat infamously he was taken out of town by water company interests before an important vote regarding Oakland's water rates. Some of the water people referred to it jokingly as "a polite and dignified kidnaping." 6 Further complicating matters, Lemmon's term expired on March 21st as the legal wrangling continued, and there was disagreement over the newly elected councilmembers, Charles Bon and Robert Boyer, taking their seats. 8

J.G. Lemmon is buried next to his wife in Mountain View Cemetery.