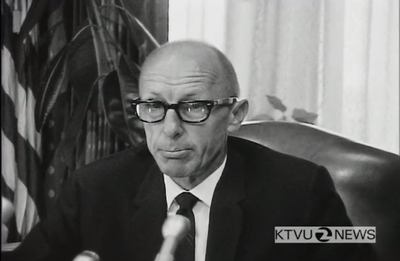 Reading was born in Glendale, Arizona, then moved to Oakland where he attended Frick Junior High then Fremont High School while working as a newspaper boy. He graduated from the UC Berkely in 1940, after having worked his way through college.

During WWII Reading served in the Army Air Force as both a pilot and flight training officer, attaining the rank of Lieutenant Colonel.

After the war Reading inherited his father's business, Ingram's Food Products, a successful company based in East Oakland, which was famous for frozen Red's Tamales.

Mayor Houlihan appointed Reading to the 7th District seat on the City Council in 1961. In 1966 the City Council voted 5 to 3 in favor of Reading replacing Houlihan as mayor of Oakland when Houlihan was indicted for embezzlement. 1 While in office Mayor Reading sold his family business.

Reading was elected in 1969 for his first full four year term as mayor, and in 1973 when he defeated Bobby Seale. He lost in 1977 to Lionel Wilson.

In 1968 Charlie Finley moved the Athletics baseball team from Kansas City to Oakland during Reading's time in office. The Oakland Athletics won three World Series while Reading was mayor.