One John Hobart was an early member of Oakland's City Council (1867 and 1868). There are historical references to both "John A" and "John H," some of which blur the "H" and "A." The document prepared by the City Clerk's office specified "JA" as the Hobart in office.

One of the Hobarts was more active in San Francisco than in Oakland, and this appears in some documents to be John A. However, an article in the August 12, 1893 San Francisco Chronicle refers to John H Hobart as Oakland's City Council member: it is possible that this is Son of H (see below), however no Hobart is listed this year in Council. (It is possible the date on the article is wrong in the digital version: the other council members listed were all from 1868).1 There is also a fantastic story about John H and a medium finding treasure under an Oakland house. This story is also dated 1893, and ages John A as about 50, the son of John H. This would place John A as born in around 1840, and John H somewhere around 1820.2 To complicate speculation further, John H was a signer of the original muster roll of the Oakland Guard, which was created to aid the Union cause in the Civil War. It's not clear what age which Hobart would be to do this signing.3 According to this same article, John A was President of the Board of Education (probably in San Francisco), had a street named after him (the former Hobart Street is now 21st Street between Harrison and Martin Luther King Jr. Way in Downtown Oakland), and was run over by a train in Port Costa, where he died a poor man. 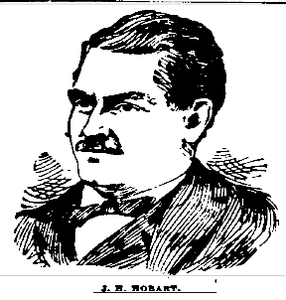 John H Hobart, who may or may not have been on the City Council, was a miner lived at the Henry House at 9th and Broadway, in Room 52 when he was involved in finding the treasure. According to The Chronicle, gold bars under a house were something of an urban legend in Oakland: they were either in a brick kiln or in an underground house in Adam's Point. After Hobart become involved, it turned out that it was both. Hobart decided to tell his story, but not the law because he found the treasure "on the property of a rich estate" (the Adams family) and thought that the owners would come after him. He and a "clairvoyant" or "medium," Mrs LB Titzell worked together, and "took a walk out to the point" where she said she had seen the treasure while in a trance. Titzell used a divining rod which snapped at a certain point, leading Titzell to give Hobart Jr more details about the buried treasure. He was skeptical, but there it was, after 15 days and nights of work. Of course, Hobart wouldn't tell The Chronicle reporters whether he found any treasure or not, nor would Titzell or the only other witness, Hobart's nephew and partner Sam Robinson. It was a great success (slash scandal) that Hobart and Titzell worked together:

"The strange discovery of the underground house has proved a very pleasant event for Mr Hobart and Mrs Titzell, for it has resulted in their being engaged to be married. Last evening the announcement of their engagement was made, and it created a sensation in the hotel where they are residing. The couple are just as happy as two people can be. The wedding is to take place in the near future. It is no wonder then that Mr Hobart desires that the lady should be given full credit for what she has done. He is just as proud of her as he can be. It has been a lucky strike for John H Hobart, for besides finding some treasure, he has won a bride."4