John L. Clayton (October 1867 – January 30, 1924) was the brother of Ella Ardelle Clayton (Butler), and a waiter for the Southern Pacific (SP). Following his death in 1924, Delilah Beasley's column said "His funeral was one of the largest ever held in Oakland, friends coming from all sections of the state to pay him homage."

Information on Clayton is hard to find, but he was probably born in October 1867 in Virginia. He married Anna ("Annie") Shelbun (Clayton), and in 1900, they lived in San Francisco. By 1910, they were living in Oakland. The 1920 census lists him as a waiter for the Pullman company, and shows John and Annie living at 886 Wood Street. The census shows they owned the house, but they had 6 boarders. More interesting are some of the Oakland directories, where he's listed as a waiter for the SP commissary (1913 and 1917). This may have been at the SP headquarters in San Francisco. 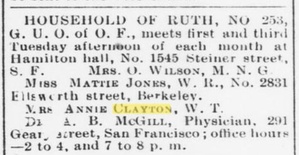 John died in 1924 in San Francisco, and Annie in 1927 in Oakland. It's possible he was still an SP employee at the time of his death in 1924 and was in the Southern Pacific Hospital in San Francisco. The funerals were held at Cooper A.M.E. Zion Church. Their bodies were displayed at Hudson and Butler Funeral Home, and they may be interred at Mountain View Cemetery. There's a grave for a John L. Clayton who died in 1924, but the original creator didn't have any additional info. 3 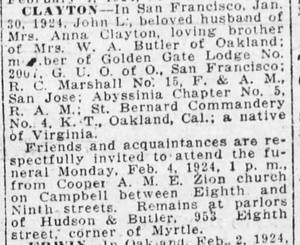 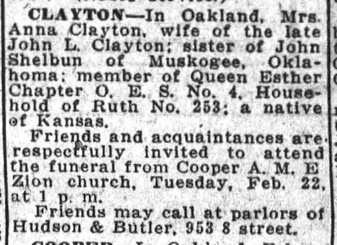