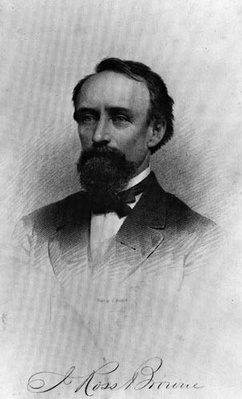 J. Ross Browne 1John Ross Browne (J. Ross Browne) (February 11, 1821 – December 8, 1875) was an author, journalist, U.S. Revenue Service Lieutenant, official reporter to the Constitutional Convention, U.S. government "confidential agent," and later mining and real estate investor. One of the best things about Browne was his work as a passionate champion for the rights of the Chinese Americans and American Indians in California.

Browne and Lucy Anna Mitchell married in 1843, and together the couple had ten children, including sons Spencer Cochrane Browne and Ross E. Browne (below). By 1907 only five of their children were still alive, with Ross E. and Thomas M. Browne, mining engineers, the only surviving sons. Son Spencer C. died in 1896 at the age of 51.

J. Ross Browne is also remembered for his unique mansion, Pagoda Hill. Nearby Ross Street is named for him. 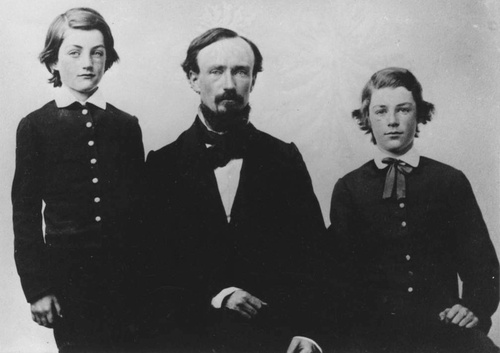 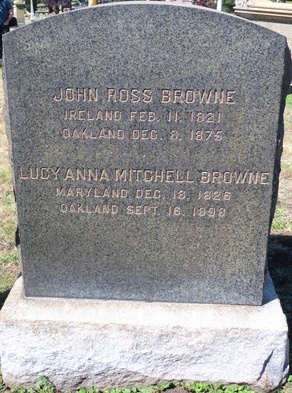 [Research ... just saving here for now before computer crashes again ... way too many windows open at one time ... will rewrite later.]

In the early 1860’s, author J. (John) Ross Browne, magically transported the Victorian reader to the booming mining towns of Bodie and Aurora, and a trip to the salty Mono Lake in the shadow of the Bodie Hills. His writings, reminiscent of another noted traveling writer of the day, Mark Twain, served to educate a nation thirsty for adventure and full of curiosity of the workings and mineralogy of the famous California and Nevada mines.

Most of us are familiar with Mark Twain, his works, and his background. J. Ross Browne is lesser known unless you have wandered upon a copy of his minute 72 page book “A Trip to Bodie Bluff and the Dead Sea of the West (Mono Lake) in 1863” in the Bodie museum book store, or are otherwise familiar with his works for in antiquated editions of the periodical Harper’s New Monthly Magazine.

Lest you think from the previous paragraphs that Browne patterned himself after Twain, it is here we point out that the reverse is actually true. Twain’s book Roughing It was originally published in 1872, consisting of similar adventures, writing style, and artwork. Twain was working at the Virginia City Territorial Enterprise when he ran across Browne’s popular Harper’s New Monthly Magazine sketches and articles on California, Nevada and Arizona. By 1866 the two were friends, and Twain was a guest in Browne’s Oakland home.

Before we embark upon the details of J. Ross Browne and who he was and what he did, it is interesting to note that Mark Twain is not the only author Brown is associated with. In the early days of his writing career, he received notice from Edgar Allen Poe, who published articles in his publication Graham’s Lady’s and Gentlemen’s Magazine. It is also said that Herman Melville wrote Moby Dick after reading J. Ross Browne’s book on his experiences working on a whaling ship.

"In the current (c. 9/26/2010) issue of the OHA News, History Room librarian Kathleen DiGiovanni recounts Browne's colorful career as a lecturer, humorist, travel writer, government agent, diplomat, and muckraker. He was known to associate with Samuel Clemens, aka Mark Twain, and biographers have even postulated that some of Twain's own travel chronicles could have been influenced by Browne's versions of events during the Silver Comstock era, when both men were submitting articles to the national publications." Good Times in Rockridge by Annalee Allen