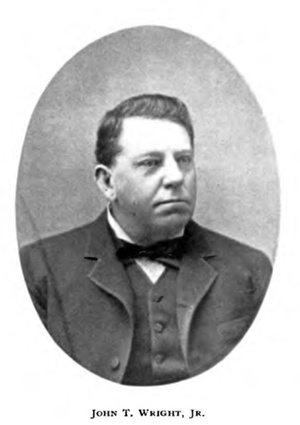 from Marine History of the Pacific Northwest, 1895 via Camron-Stanford House collections Captain John Tennent Wright, Jr. (December 24, 1826–1911) was a sea captain and capitalist. He and his family were the last residents of Camron-Stanford House, from 1903 until 1907. Wright was also the uncle of Children's Hospital founder Bertha Wright.

John went to the gold fields, but unlike a lot of fortune seekers, he actually made money panning for gold. "Within six months he cleared $15,000 panning on the American River and returned to San Francisco to purchase the bark Clarissa. His first voyage to Panama was a disaster. The outbound sailing had paid for the cost of the ship but it was lost on the return voyage (although most passengers were saved)." 1 After that, John went to work with the family business.

From his obituary in San Francisco Call Bulletin 5/20/1911 page 17: OAKLAND, May 19 —— Captain Jahn Tennant Wright, a pioneer master mariner and director  in the Oakland gas light and heating company, and the Fireman’s fund insurance company, died last night at the age of 84 years at his home, 1321 Madison street.  He had been stricken with apoplexy, to which he succumbed at 10:30 o’clock.

Captain Wright was a familiar figure in San Francisco and Oakland for many years. He was born in New York city December 24, 1826. In 1849 he came to California, making long journey through Mexico.

For many years he held his directorship in the Oakland gas light and heating company, serving as vice president part of that time. For 35 years he was one of the directors of the Fireman’s fund insurance company, retiring on account of ill health at the time of the San Francisco fire.

Captain Wright was a life member of the Society of California pioneers. The funeral will be tomorrow, only members of the family attending. Interment will be at Mountain View cemetery.

Wright died in 1911, and is buried in Mountain View Cemetery with his first wife and son in plot 9, lot F, grave #5. There is no marker for John, but a monument marks the graves of Susan and George.