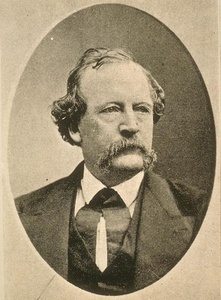 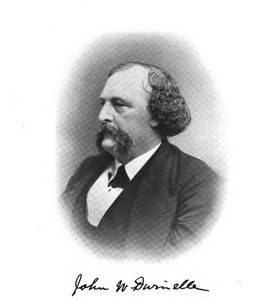 Dwinelle was born in New York in 1816 and graduated from Hamilton college in 1834. His father was a member of Congress from New York. Dwinelle studied law and worked at various newspapers in New York. In 1837, he opened a legal practice in Rochester, New York and in 1844 he was elected city attorney of Rochester. In 1849 he came to San Francisco and started a legal practice.1

In 1850, Dwinelle was elected for the first time to the San Francisco City Council and served two terms. Dwinelle spoke Spanish and was familiar with colonial history and Spanish land titles which made up the bulk of his law practice.3

In 1864 he was elected to Mayor and in 1867, the California State Assembly, representing Alameda County. He was a member of the Union Party.

Dwinelle was also very influential in the founding of the University of California. He wrote the original charter for the school and while on the State Assembly, he wrote and introduced the 1868 Organic Act which established the school.4

Another important case that Dwinelle was involved with was Ward v Flood in 1874. A California version of Plessy v. Ferguson, the  California Supreme Court ordered that colored children could be excluded from white schools as long as equal schools had been set up for colored kids. If there was no such facility, colored children must be admitted to white schools.7 Dwinelle argued that blacks had been discriminated against and that the current state law furthered prejudice and therefore was unconstitutional.9

Dwinelle was known as a big reader, especially of the classics. He also wrote books, including a colonial history of San Francisco. He is credited with the establishment of the San Francisco Law Library.

Dwinelle was married twice, to Cornelia Sterns and then to Carolina McLean Chipman, the widow of attorney W.W. Chipman. He was a member of the Art Association and the Bohemian Club.5

Dwinelle died while trying to catch a ferry in Port Costa. He fell in and drowned, and his body washed up three weeks later.6 The Sacramento Daily Union wrote that this was very alarming: how could no one have jumped in and saved an elderly man who had fallen off of a pier? They demanded an inquiry into the circumstances of his death.11 The Daily Alta California suggested that he had a drink before heading toward the ferry, which had already left. He then literally missed the edge of the dock and fell into a fast-moving current.12

At his passing, the City Council passed a resolution honoring him and were in ceremonial mourning for 30 days.8 Dwinelle Hall and Dwinelle Annex at the U.C. Berkeley campus are named in his honor.10