J. B. McChesney
from The Beginnings of Oakland by Peter T. Conmy. Courtesy Oakland History RoomJoseph Burwell ("J. B.") McChesney (October 12, 1832–February 25, 1912) was the principal of the Irving School c.1876–1887 and also the first principal and organizer of Oakland High School from its beginning in 1869 until 1901. He was president of the Oakland Library Association c.1876. 1 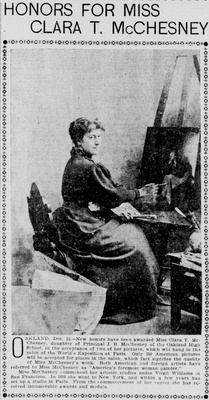 from SF Call, 1899 6J. B. was born in 1832 in Brunswick, New York, to Francis McChesney and Mary A. Betts (McChesney). After graduating from Union College in Schenectady, New York, McChesney came to California via the isthmus of Panama in 1858. Later that year he met and married Sarah Susan Jewett (McChesney) (June 19, 1835-May 26, 1926), the daughter of a miner in Forbestown. J. B. and Sarah had three children: Clara Taggart McChesney, Mary Alice McChesney and Dr. George Jewett McChesney. Clara became a well-known artist in New York and Paris, and died while in England. George was an orthopedic surgeon, served in the medical corps in WWI, and was a tennis player of some note. Sarah McChesney was a member of the Ebell Society.

After getting married, J. B. McChesney taught in Forbestown, Oroville, and Grass Valley. In 1859, he was nominated by the Republicans for the state legislature, but defeated, "which he does not regret as his success might diverted his attention from what seems have been his true vocation, teaching." 4 He served as principal of the school in Nevada City from 1862 to 1867. He then came to Oakland in 1867 and became a teacher and principal of the Lafayette School.

J. B. was an investor and director of the Educational Publishing Company, which was created to publish The Pacific Journal of Education. 7

In 1902, he temporarily worked as a statistician for the customs house in San Francisco, tracking imports from Puerto Rico and the Philippines for tariff purposes. 8 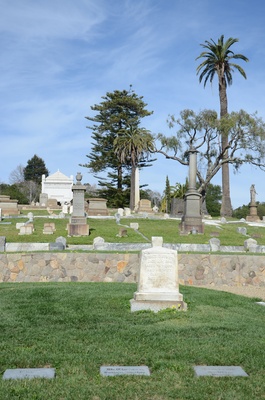 CC SA-BY Our OaklandAfter retiring, McChesney moved to Mill Valley then to San Francisco. He died at his home in San Francisco on February 25, 1912. The Oakland city council ordered flags flown at half mast. J. B. and Sarah are buried in Plot 13 in Mountain View Cemetery. The rest of the family and Sarah's parents are buried there, too. Listed on the marker are: