Joseph Moravia Moss (March 1, 1809 – Novmber 21, 1880), also known as Joseph Mora Moss was an early Oakland resident, and one of the namesakes of Mosswood Park.

born March 1, 1809 in Philadelphia, PA1. In 1837 he lost much of his inheritance in the "panic of 1837". In 1840 he was named as Consul of Belgium for the port of Philadelphia7. This perhaps presages his involvement with Pioche & Bayerque. In 1857 he and a consortium of others (including Horace W. Carpentier) bought the Rancho Arroyo Seco land grant, which later became the town of Quincy, among others. At one point he held the mortgage to the "Saucelito Rancho" (Sausalito area of Marin), for which he was paid, very well, in 1863. He built Mosswood the following year. He married Julia Theresa Wood on December 19, 1867. They had no children, although a nephew, Joseph Mora Moss (1843-1862) was apparently named for him. He died November 21, 1880. He was in finance and banking, rising to executive and ownership roles in several significant companies, which themselves later became companies we still know today. He was on the board of directors of the Union Savings Bank, along with other prominent Oaklanders 8. He lived in what is now known as Mosswood Park, on an estate known as Mosswood. Interestingly, his property was bounded on the west by Telegraph Avenue, which he had a direct part in naming; "In April 1859, a cable was run across the Carquinez Strait between Benicia and Martinez, and a connecting line constructed from Martinez to Oakland over the Berkeley Hills (then called the Contra Costa Range). It was this line which gave rise to the name "Telegraph Road" for the thoroughfare which the line followed down the western slope of the hills, which later became Telegraph Avenue in Oakland and Berkeley." 6 Joseph Mora Moss was a director of the California State Telegraph Company4 5, which owned that line, and all other telegraph lines in the state, alongside fellow director, and former Oakland mayor, Horace W. Carpentier. The Mosswood estate's name was a combination of Joseph and Julia's last names. 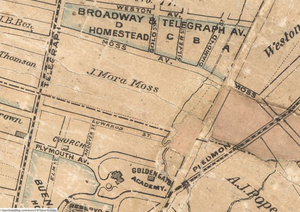 J. Mora Moss property in the 1876 Map of Oakland, Alameda and Vicinity

Decease of a Prominent Pioneer - The Last Moment of J. Mora Moss - Cause of Death.

Yesterday morning shortly after 4 o'clock, Joseph Mora Moss, a well-known resident of Oakland, and one of California's most prominent and influential citizens, passed away from life, at his late residence, corner of Telegraph and Moss avenues, in this city. He has been suffering from a protracted illness. The age of Mr. Moss, at the time of his death was seventy-one years, eight months and twenty-one days. He was born in Philadelphia, his father being English and his mother an American. In the year 1850 he came to California, and for several years was associated with the banking house of Pioche & Bayerque. His home has been in this city for eighteen years, he being one of the first citizens of California to note and appreciate the beauties of Oakland as a place of residence. He was one of the projectors of the Oakland and San Francisco Railroad, and Ferry Company, and later become interested in gas, water and ice companies across the bay and in this city. He was also largely interested in the Russian Fur Company. For many years prior to his decease Mr. Moss was intimately connected with many institutions of learning and charity, where his broad and comprehensive mind and warm heart were powers for the good in of the young and needy. He was an influential member and President of the a Board of Directors of the Deaf, Dumb and Blind Asylum, where his loss is deeply felt among the afflicted in whom he took such a great interest. He was also a member of the board of Regents of the University of California and an active member of the Advisory Committee of that Institution, where his counsels were always heard and listened to with pleasure and profit. Mr. Moss was a man of liberal views, strict integrity, great public spirit, and splendid financial ability. He always stood ready to alleviate the sufferings of the poor and needy. His life was one to be regarded as a model. His good deeds were numberless, and the sincere mourners of his decease are many.

An autopsy was held this morning by Dr. Selfridge of this city, assisted by Doctors Brigham and Peace of San Francisco, which was performed at his own request. The immediate cause of death was found to be enlargement of the heart from dilation. The funeral will take place to-morrow at 10 A, M. from his late residence, and will be strictly private in accordance with his wishes.

Joseph Mora Moss3 came to California in 1854 after several financial ups and downs. His father, who was English, had left him a considerable fortune which was wiped out in the panic of 1837. His mother was a member of an old Colonial family. Moss was born in Philadelphia in 1809. His first position was as a clerk with the Bank of Pioche Bayerque and Company. He had a genius for being president of any organization with which he was connected and held the chief execủtive offices in the first gas company in San Francisco, Kings River Canal and Irrigation Company, Union Ice Company, the American-Russian Commercial Company and the Deaf, Dumb and Blind Institution, Berkeley: He was a regent of the University of California. Moss was connected with the first telegraph company in California4 5 6.

He died in 1880. Mrs. Moss lived until 1904. It was after her death that "Mosswood" came into the possession of the city and has become one of the famed playgrounds and recreation centers in Oakland.

See also J. Mora Moss House on wikipedia, and his burial site at findagrave.com. His collected papers - not on-line - are in the California History Room of the California State Library.