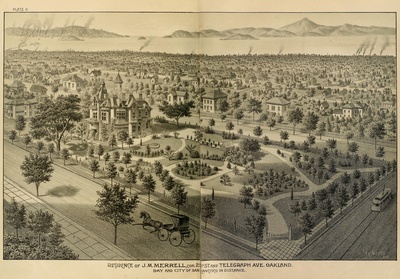 The Josiah Merrell Mansion is at 534 - 25th Street. It was originally built for A. J. (Andrew Jackson) Ralston, who had significant mining and smelting interests. 2, 3Josiah Merrell added on to it substantially when he purchased it c.1888. While the building still stands and is known as the Northgate Manor Apartments, it has been so heavily modified into apartments that it is barely recognizable.

"The home at that time was palatial, but after the purchase it was amplified, enlarged, beautified and enriched so that its former owner would not recognize it. There was nothing that money could do which was not done, both on giving to the home on the exterior all the graces of the architecture and within all the embellishment, richness of furnishing, works of art, gems of sculpture, chef d'ouvres of tapestry, and a wealth of literary treasures which only a cultivated taste allied to a liberal spirit could provide. The grounds about the mansion are spacious, several acres on either side being variegated by parterrca, serpentine walks, arbors, rockeries, playing fountains and a display of shrub, tree and flora, unexcelled by any in this community." 4

The Illustrated Album of Alameda County describes the estate:

"Situated right in the heart of the city of Oakland at 25th Street and Telegraph Avenue, is the palatial home of J. M. Merrell. The grounds occupy one block... (ref)

The surrounding property was sold in 1904, and an article describes the house as having been "frescoed by artists brought from Italy especially for the work" and having inlaid hardwood floors. 2