Ken Houston was a candidate for mayor in the 2014 Election. He was eliminated in the 7th round.

Please make sure to read the copyright page before uploading any images here. 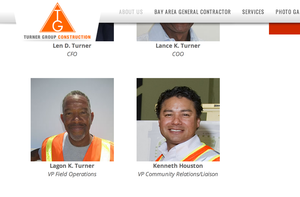 He is chair of the East Oakland Beautification Council (EOBC).  Turner Group is one of many stakeholders supporting this organization which was founded in January of 2014.  Ken Houston was appointed to chair this organization to address the horrific problem of illegal dumping and graffiti in East Oakland.  The EOBC held roundtable discussions inviting stakeholders, public officials, and residents that are fed up with the blight in their neighborhoods.  The EOBC launched its first "Operation Clean Sweep" in May of 2014 cleaning graffiti and illegal dumping for a 2.25 mile stretch on San Leandro Street running along the Union Pacific Railroad tracks and today remains 95% (later downgraded to 75%) graffiti free.  Of note, within this stretch, Ken Houston designated an area called "Graffiti Cove" where graffiti artists can "legally" throw up their art without penalty.  In this way, the EOBC created a zero tolerance plus embracing of graffiti artists -- a tactic that brings two polarized sides together.  It is the first of its kind in Oakland, and it claims to have been successful.  However, questions around Operation Clean Sweep came up in 2015 when the Community Rejuvenation Project published a series of articles investigating Houston, EOBC and the area where Operation Clean Sweep was conducted. EOBC was revealed to be taking credit for other organization's work while failing to produce the study that demonstrated the 95% effectiveness of the project. Further, it showed that Operation Clean Sweep's methodology contradicted the large, publicly available best practice recommendations set forth by the United States Department of Justice.

Per Campaign manager, Houston is not accepting endorsements or donations. (source)

Please note: The OaklandWiki 2014 Mayoral Election Team is making every effort to keep the information on this page up-to-date and neutral as possible. In the spirit of a wiki, however, this page is fully editable. We encourage sourced/sourceable contributions above as well as respectful comments below.