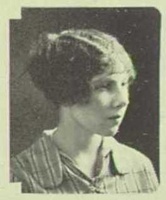 By 1920, the Bussets had moved to Oakland and were running the Key Realty Company. Eada graduated from Oakland Tech in 1926.