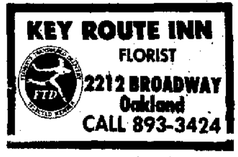 The Key Route Inn Florist was a long-time flower business near the Key Route Inn building. It was owned and run by the same family for 83 years, starting with George Segarini. It was in business from _ to _.

In 1960, they were one of numerous sponsors of the Italian Festival. (One of the sponsors thanked by Breuner's in a full-page add in the September 18, 1960 Tribune.)