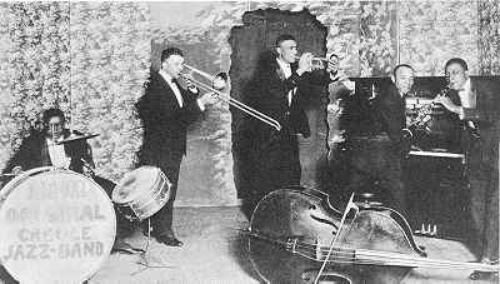 Edward “Kid” Ory (December 25, 1886 – January 23, 1973) was a Louisiana-born French-speaking jazz trombonist and bandleader. He was born on Woodland Plantation, near LaPlace, Louisiana. Ory had one of the best-known bands in New Orleans in the 1910s, hiring many of the great jazz musicians of the city, including the cornetists Joe "King" Oliver, Mutt Carey, and Louis Armstrong, who joined the band in 1919; and the clarinetists Johnny Dodds and Jimmie Noone. 1

The first-known venue to feature African-American music on Seventh Street was the Creole Café, where pioneering New Orleans “tailgate” trombonist Kid Ory (then an Oakland resident) appeared regularly in 1921 with his Original Creole Jazz Band. A year later, the group traveled to Los Angeles and became the first black jazz band ever to make a recording. 2

Kid Ory made his first appearance in the Bay Area at the Creole Café in Oakland. The band was as successful in Northern California as it had been in the southern part of the state, and the musicians were playing constantly. Ory was even able to secure an engagement for King Oliver at the Pergola Dance Hall in San Francisco. 3