Kijani Grows is an Oakland business that “produces and installs smart aquaponics gardens for homes, schools, and corporate settings.” Run by Kenyan engineer Eric Maundu, it currently operates out of American Steel Studios.

Kijani Grows designs and manufactures Aquaponic Smart Gardens that grow microgreens. Before studying Industrial Robotics and Computer Engineering, Eric Maundu developed an interest in agriculture and aquaponics in Kenya. Seeing how farmers struggled with lack of land, water, and other resources, Eric decided to combine his skills in engineering with his interest in farming in order to create self-sufficient farming methods that conserve water. His interest and degrees led him in 2009 to start Kijani Grows.

Kijani Grows Aquaponic Smart Gardens are mobile, two-tiered gardens. On the top tier, microgreens grow in an inert medium of gravel and expanded clay. On the bottom tier, below the garden, sits a fish tank. An open-source platform manages and maintains the garden’s operations, integrating the two tiers in a self-monitoring and self-controlling system.

A typical Kijani Grows garden includes a fish tank at the bottom, about a foot of pebbles on top (the pebbles function as the growing medium for plants), growing lights on top, and a custom-designed Arduino on the side that provides detailed information about the status of the ecosystem (systems in development allow for control of various elements of the ecosystem, such as lighting, to be controlled remotely from the operator’s computer). See video and photos below for more info.

To maintain these systems, the Smart Aquaponic Garden uses sensors, microprocessors, and controller kits. The sensors monitor tank level, water quality, flow rates, water temperature, pH, irrigation, drainage, and light intensity. The microprocessors send real-time data to an online platform – like a Facebook or Twitter account, or a personal website – where the information can be shared and viewed in visualized charts. The controller kits use actuators and pumps to move the water through the system and feed the fish.

Because the gardens are fully automated, they can be controlled from anywhere in the world. The system notifies users by text, email, or Twitter if an issue arises, giving them options to make changes.

A Kijani Grows Smart Aquaponic Garden combines the benefits of aquaponics with the power of technology to grow fresh, organic microgreens:

Over the next 10 years, 4.6 million jobs will need to be filled by candidates possessing a strong foundation in computer programming and computer science. Unfortunately, current trends in education suggest that students are graduating today with little to no computer programming knowledge. For example, computing in the Core, a non-partisan advocacy coalition of associations, corporations, and scientific societies performed a study titled “Running on Empty: The Failure to Teach K-12 Computer Science in The Digital Age.” They note the following:

“As the digital age has transformed the world and the workforce, U.S. K-12 education has fallen woefully behind in preparing students with the fundamental computer science knowledge and skills they need for future success. To be a well-educated citizen as we move toward an ever-more computing-intensive world and to be prepared for the jobs of the 21st Century, students must have a deeper understanding of the fundamentals of computer science.”

In the March 10, 2013 issue of the San Francisco Chronicle In the East Bay, Eric Maundu was featured on the front page: 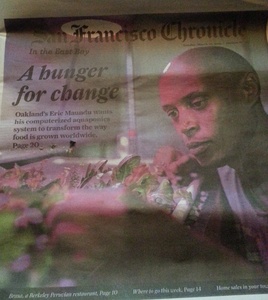 In the summer of 2012, a video of Eric Maundu explaining Kijani Grows went viral and hit the main page of Reddit. Kijani Grows has also been covered in Civil Eats.

Kijani Grows was the recipient of the East Bay Express Best Place to Buy Aquaponics Gardens Award in 2014. 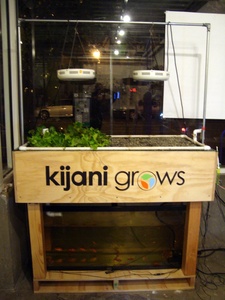 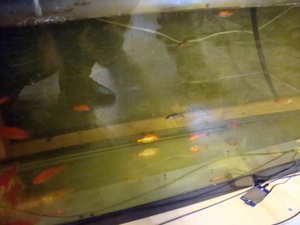 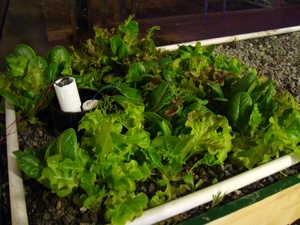 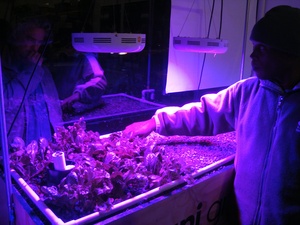 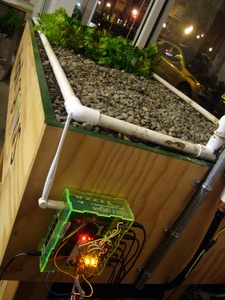 Custom-designed Arduino microcontroller that provides detailed information about the status of the ecosystem to allow for optimization of the Kijani Grows setup. (Feb. 2013) 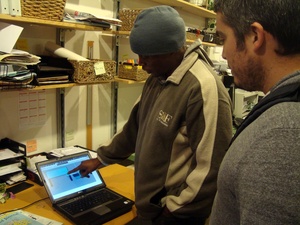 Eric Maundu shows the data gathered by the Arduino that allows him to analyze (and improve) the performance of the garden. (Feb. 2013) 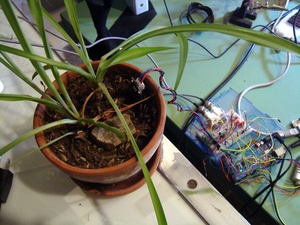 This plant has a sensor in the soil (upper right) that provides information about the plant to the microcontroller (left). (Feb. 2013)