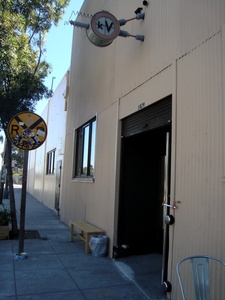 photo by mk30Replacing 10th and Wood as the face of gentrification in West Oakland, Kilovolt Coffee is a newish (2014) coffee spot on Mandela across from American Steel Studios.

In June, 2014, they had their windows smashed in and graffiti sprayed in what seemed to be anti-gentification protests [sources: one, two]. The owners thought it was related to gentrification because the vandalism happened right after the West Oakland Specific Plan (which has been a target of anti-gentrification protests)

Some more articles about the spot: