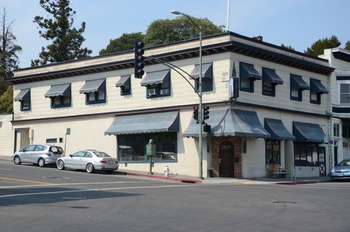 as the Kona Club

King's X Bar was a long-time bar on Piedmont Ave. at the corner of Pleasant Valley, and was the birthplace of fantasy football.

The bar was purchased by Andy Mousalimas, his wife Mary Mousalimas, and his brother-in-law John Kumarelas c.1968. It had previously been Bud's Bar and Liquor Store. 2

Mousalimas retired as bartender in 1975, and the Mousalimas sold the bar in 1991 to Nicholas Haney (who added the windows and the brick exterior.) The bar was sold with the condition that if Haney ever got rid of the stained-glass Brooklyn Steam Beer sign, it was to be donated to the Oakland Museum of California. Haney moved the sign inside, back-lit it, and hung it on a wall. The sign was made by H. Dombrink Company. 1