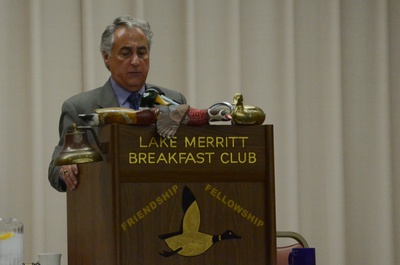 The Lake Merritt Breakfast Club (LMBC) was organized in 1933 to promote the benefits of fellowship and friendship, and to foster and create interest in - Lake Merritt and its surrounding Park. They meet weekly (for breakfast, of course), at the Lakeside Park Garden Center.

In 1948, the club sponsored the creation of Children's Fairyland in Lakeside Park, and over the years has continued to provide financial support and volunteer labor for Fairyland.

Additionally, the Breakfast Club raised $1.6 million during the 1980s for the restoration of the landmark Necklace of Lights around the shores of Lake Merritt.

The club was the idea of A. “Al” Wallace Smith, the manager of the Lake Merritt Hotel in 1932. The main purpose would be to “Promote activities and call attention to Lake Merritt.” The club first met on December 1, 1932, at the hotel. At the first meeting were: Smith. Eric “Jim” Dandy a PR person, plus Earl Leonard, who chaired the meeting, J. A. Sammon, J. C. Cooper, George Lickteig, R. C. Beckman, André T. Fontes, R. N. Luscombe, H. Henry F. Graef, Harry Knox, C. M. Burton and John J. Schoonmaker. During this meeting George Lickteig suggested calling the club the Lake Merritt Breakfast Club. 1