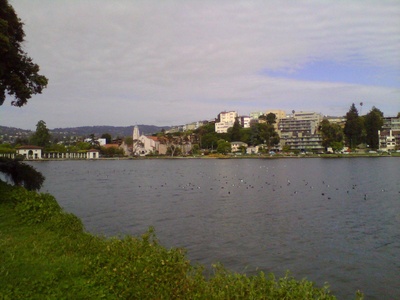 Established March 18, 1870, Lake Merritt Wild Duck Refuge is widely acclaimed as the United States’ first official wildlife refuge. The wildlife sanctuary officially encompasses the entire 155-160 acres of Lake Merritt, and provides sanctuary for migratory birds. It came into being at the behest of Dr. Samuel Merritt, who wanted not only to protect birds and area residents, but also doubtless realized that lakeside real estate would be even more valuable without the sound of hunters’ guns. The California law creating the refuge, signed by Governor Henry H. Haight, forbade "the destruction of fish and game in, upon and around the waters of Lake Merritt" but did not formally name the area as a wildlife refuge.7  At least as of 1870, it was a de facto rather than de jure wildlife refuge.[question: when and how was it formally enacted?] According to the City of Oakland website:

“In 1915 organized feedings of the wildlife (ducks) began. In 1925 1923 the first bird island was constructed, and four additional islands were erected in 1956 1953-1954. These are the largest of the artificial islands that house hundreds of egrets, herons, Canada goose, and many other species of birds. The islands are equipped with fresh water ponds. To ensure that marine sports and boating activities based at Lake Merritt aren’t disruptive to the birds, a boom cordons off the five islands from this section.”

Renowned landscape architect Howard Gilkey designed the original duck pond on Lake Merritt as well as landscaping the first island. 2 The island was informally named 'Gilkey Island', but he declined the honor and renamed it 'Duck Island.' 5 There was discussion about adding more duck islands as early as 1950 when plans around Children's Fairyland were growing, but they weren't constructed until 1953-1954. 6

On May 23, 1963, the Lake Merritt Wild Duck Refuge was deemed to be eligible for listing on the National Register of Historic Places.  The actual application for registration was submitted in 1977, and the Refuge was finally listed in 1983. 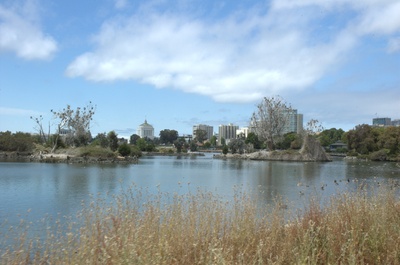 bird refuge islands in Lake Merritt
photo from Our Oakland

Stray bullets from hunters hunting the lagoon’s birds tended to endanger homeowners. In 1870, fed up with the near misses, Samuel Merritt took legal action, petitioning in up to State-level courts that the lake be designated a protected refuge. With the passage of the first such municipal protections in the country, none of the lake’s waterfowl or wild animals could be hunted. 1

A 1915 oil spill in the Bay came in on the tide and coated the waterfowl. Volunteers cleaned the birds, and then the Oakland City Council allocated funds to feed them, creating the daily feeding program which continued for decades. Ducks, geese and other waterfowl on Lake Merritt would fly or swim in to the shore each day when they heard the bell ring at 10:00 a.m. and 4:00 p.m., with children, families and other spectators gathering around to view the feedings. Naturalist Paul Covel stated “The daily afternoon feeding at the fresh-water pool has become the city’s biggest free attraction.” 1 Sadly, the twice daily feedings were discontinued a few years ago, due in part to some people’s complaints that the birds were not migrating (not true), and also to a lack of city funds.