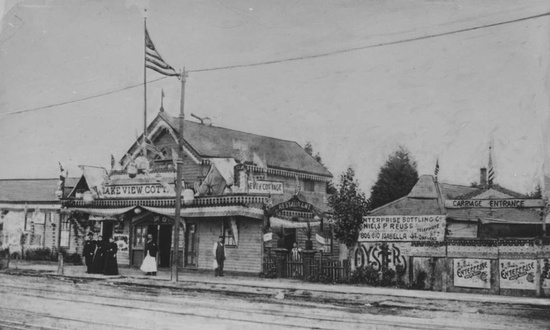 Lake View Cottage at the 12th Street Dam in Oakland, with the adjacent former "House of Blazes" restaurant (July 4, 1895) 1

Lake View Cottage, situated at 15 - 12th Street, was operated as an inn, restaurant and saloon adjacent by August Dupont through 1896. The cottage served as an expansion of an existing restaurant, "Bellevue du Rendez-vous de Chasse" opened by chef Charles Blaise. The restaurant became commonly known as "House of Blazes," adapted from the proprietor's surname. The resort as shown sat on pilings over San Antonio Creek on the south edge of the 12th Street Dam. The retouching of the badly mottled original was accomplished by graphic artists at the Oakland Tribune prior to the publication of the image in 1952.