Lakeview Elementary School, catty-corner from the Grand Lake Theater, was one of more than a dozen public schools opened by Mayor Mott in 1913. John J. Donovan was the architect of Lakeview Elementary. The estimated cost of building the school was $75,000.

Lakeview School, at Perry Street (later a part of MacArthur Boulevard) and Grand Avenue, opened its doors during the fall season in 1914. 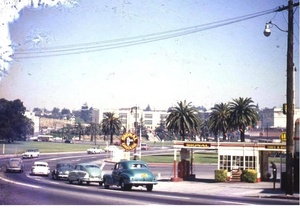 Lakeview Elementary School as seen from near the former intersection of MacArthur Blvd. and Lake Shore Avenue in 1957 2

I hadn’t been back since first grade, until one day a few years ago, when my son and I arrived at the Grand Lake too early for our movie. We went in and checked Lakeview out. Wow! Pre-WWI stuff was built to last: nearly everything was made of solid metal, stone, or tile, and generations of fidgety schoolkids had been able to leave … nary a trace, that I could see. Not even earthquakes seemed to have bothered this mighty fortress of an institution. I pointed out a doorway where a kindergarten classmate had once barfed, and when the janitor couldn’t be located, and we had to get to recess, we all had to jump over … oh, the stories these walls could no doubt tell …

I attended Lakeview Grammar School from February 1942 to June 1950. I started with kindergarten and graduated from the 7th grade. We had high and low class grades depending upon whether you entered school in February or September of a given year. I first attended the temporary school on MacArthur (Originally Perkins) kitty corner from the far back part of the school playground. The school was reconstructed from around 1940 to 1942 for earthquake upgrading following the Long Beach quake. During the reconstruction I believe the school was unoccupied. I do not know what structural changes were made. But it was my belief that the exterior walls were all thick brick. As I recall we had a student body of about 420 excluding the kindergarten students. I do not believe that the auditorium could hold the entire student body. 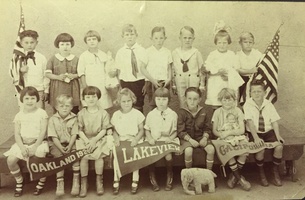 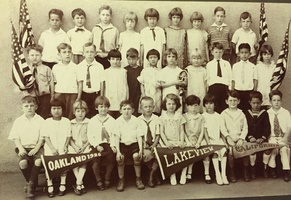 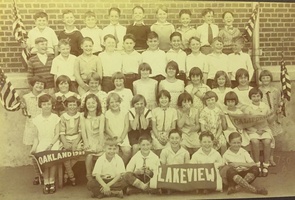 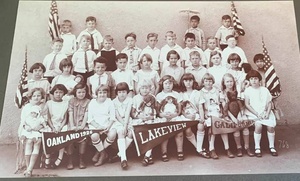 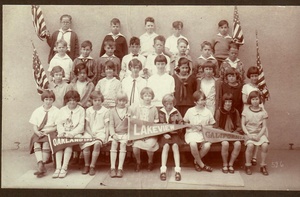 Lakeview’s decommissioning (just shy of a century later, in June 2012) generated much controversy, and Occupy Oakland even got involved. Ultimately, the authorities prevailed, “order was restored”. For a couple of years, it was used for OUSD administrative offices and then leased to the American Indian Charter school.

There is a mural on the side. 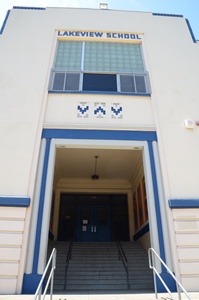