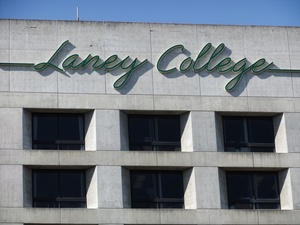 Laney College is a community college located near Lake Merritt in a neighborhood named after it. It was originally opened in 1953 as the Oakland City College, but its roots go back to 1927 as the Oakland Central Trade School. It is named for founder Joseph C. Laney.

Laney offers class that help people transfer to different colleges that a person may want to go in the Bay Area (and beyond). They offer classes for the arts, cooking, and Sciences.

Laney has an Edible Garden located between the Oakland Estuary and the E Building. You don't have to be a student to volunteer at the garden! To learn more about it, contact Laney Biology instructor Douglas Bruce at [email protected]. Here's some information from him: "The garden was started in September 2008 by Dean Linda Sanford, Culinary Arts, and a few community groups like PUEBLO and Cycles of Change. In addition, funds for the garden came from various supporters, including the Sustainable Peralta committee in the form of mini-grants." Learn more at http://www.laney.edu/wp/doug_bruce/laney-garden/.

Part of the garden is also a community farm run by refugees who live in Oakland. The program is called New Roots, a partnership between Laney and International Rescue Committee, an international humanitarian aid organization. Part of the IRC's work involves helping refugees resettle in the US. They've created New Roots gardens in 14 cities and the Oakland one was started in April 2013. The New Roots garden is on one-fifth of an acre within the Laney Garden. Participants in the program share the plot, work in the garden, and are able to take home a bag of produce every week. Whatever produce is left over is shared with Laney College Bistro or sold to the Phat Beets CSA. Here's a story in Oakland Magazine about the New Roots program. 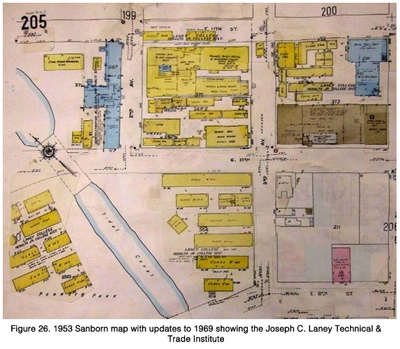 When Laney died in 1948, the Oakland Board of Education renamed the Central Trade School the Joseph C. Laney Trade and Technical Institute. 1

In 1966, Skidmore, Owings and Merrill, Architects designed a new campus for Laney. 1 The campus opened prior to the 1970-1971 academic year.