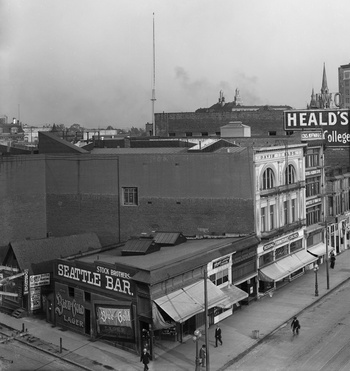 The Latham Square Flagpole was a 150' flagpole at the intersection of Broadway and Telegraph (before that was known as Latham Square). It was erected in 1899, and included a brass eagle which was a gift of Major E.A. Sherman. Sherman had also collected soil from "all the historic American battlegrounds" to be placed at the base. 3

According to the San Francisco Call, permission was given for the flagpole to be erected in City Hall Park, but Craigie Sharp and others took it over to Telegraph and erected it there. The Christian Endeavorers were incensed that it was raised and painted on the Sabbath. There was some confusion about whether the flagpole now belonged to the city or not. 2 The Tribune said the original plan was to place it in City Hall Park, but John A. Britton suggested the gore point at Broadway and Telegraph instead, because it was likely a new city hall would be built soon, which would necessitate the removal of the flagpole. 4

The flagpole was razed on November 28, 1912, to make way for the Latham Fountain, 1 so Britton's plan made no difference in the end. 4