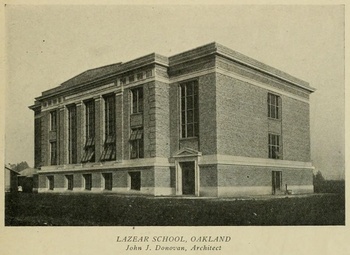 Lazear School was first constructed in 1914 2 at what was then the corner of Park and Division Streets (now 29th Ave. and E9th St.) It was named for Dr. Jesse Lazear, who gave his life in the research of malaria and yellow fever. Dr. Lazear died in 1900 in Cuba after deliberately allowing an infected mosquito to bite him. 3

The original school was demolished and a new building constructed in 1959. 5 It is now the Lazear Charter Academy. 4