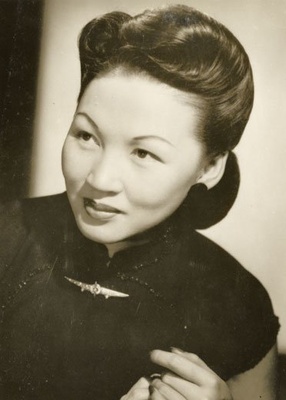 Lee Ya-Ching or Li Xiaqing (April 16, 1912 – January 28, 1998) was an aviator and movie actress, also known by her stage name, Li Dandan. She was the first woman in China to get a civil pilot's license in 1936, and co-founded its first civilian flight school.

Lee attended the Boeing School of Aeronautics in Oakland in 1935. 1,3

She died in Oakland in 1998, and is buried in Mountain View Cemetery. An article on the Forgotten Newsmakers website says "For her final resting place she wanted to feel the same expanse she felt while flying. She had bought four adjacent plots in the Mountain View Cemetery and insisted that she be buried right in the center with lots of space around her." 2

You may also want to read about Hazel Ying Lee of Portland, Oregon.