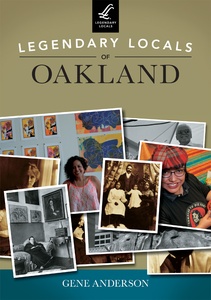 Legendary Locals of Oakland is a book written by Gene Anderson in the Legendary Locals series of books by Arcadia Publishing, and was released in December, 2015. Arcadia is the publishing company that produce the Images of America series which has a number of Oakland titles, and Postcards of America, which includes Annalee Allen's Oakland: Postcard History. This series "highlights the unsung local heroes who have made a memorable impact on their community throughout history."

"I had another resource that wasn't available to these authors, the Oakland Wiki (www.oaklandwiki.org). This ever-growing online encyclopedia about Oakland allowed me to organize, research and connect people in new ways. More than once, the Oakland Wiki also provided a way to connect with family of legendary locals and get photographs and facts that weren't available before. Thanks to Mike Detwiler, Lauren Briskin, Neal Parish, and the rest of the crew who have contributed to the Oakland Wiki."
-- Acknowledgements from Legendary Locals of Oakland

If there's someone in Oakland you think should be in such a book, tag their wiki entry with "legendary local" (or start a page if necessary.) Please do not remove the tag from any entries.

The book includes 180 people and photographs; photographs will need permission from the owners or copyright holders. But you can see from the lengthy list (~250 at last count) that one of the difficulties of the project was limiting the list to less than 200 notable Oaklanders.