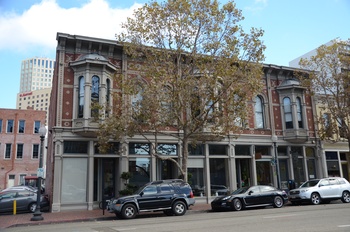 Constructed in 1873-74 by the Oakland Real Estate Associates, the Leimert Building at 456 Eighth Street was purchased in 1874 by Louis Leimert, a native of Germany and a candy manufacturer. During the 1870s, ‘80s and ‘90s the building was considered the nerve center of real estate promotion, with the Contra Costa Water Company and real estate tycoon William J. Dingee as two of its tenants. During the twentieth century the Leimert’s brick façade was covered over with stucco, and the three protruding bays were ripped out and replaced with aluminum sashes. But now as part of the Old Oakland rehabilitation, its former glory has been restored: the bay windows are back, and the stucco has been scraped away to reveal a highly unusual, beautiful brick pattern. 1

Today the retail level is home to the famous Tamarindo Antojeria, Miel Tequila Bar and Belgium Biers microbrewery, and The Trappist, a Belgian & Specialty Beer Pub. 1 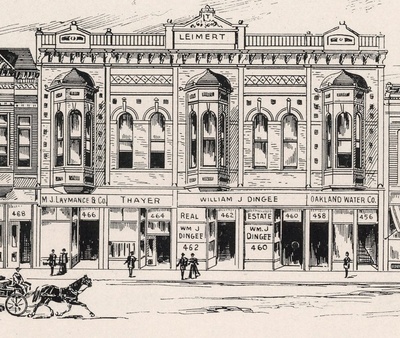