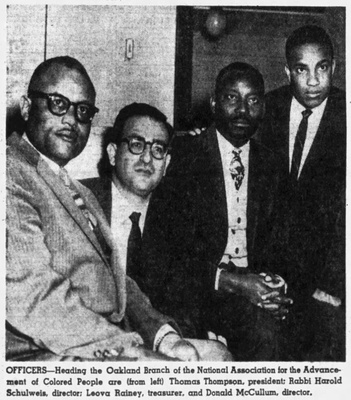 Rainey was born January 26, 1915 to Isaac Rainey and Dora Rainey in Omaha, TX. After Dora died in 1918, Rainey was raised by his grandmother in Clarksville, TX.

After serving in the US Navy from 1943 to 1946, Rainey worked for the Golden State Mutual Life Insurance Company for 32 years.

Besides his church, Rainey was active with the NAACP, the YMCA, the Omega Psi Phi Fraternity, and Monarch Lodge #73 of the Masons. In December 1959, he became treasurer of the Oakland NAACP. Donald McCullum was director. 3

In 1951, Rainey built a small apartment building at 1618 Blake St. in Berkeley. 1 The Raineys lived there the rest of their lives. [ ? - they owned it until their deaths. Mildred may have moved to Texas after Leova died. ]