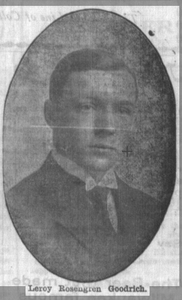 Goodrich in 1907, at Cornell1Leroy Rosengren Goodrich was originally from Buffalo, New York. Goodrich attended Cornell University and graduated in 1908. He was active in debate and was elected Senior President in 1907.2 He stayed active with his alma mater and was a member of the Cornell University Club of Northern California.3

Goodrich was the manager of the Frontier Press.4 He was admitted to the California Bar as an attorney in 1933.5  The 1940 Census stated that he and his family, including his wife Lena, daughter Jean, and his mother and father-in-law, lived at 6028 Broadway Terrace in Oakland.6