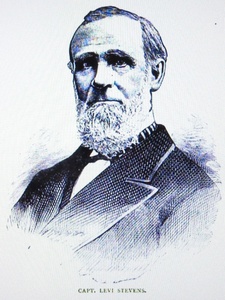 Captain Levi Stevens (May 16, 1812–November 26, 1882) was a New England ship captain who established a successful shipping and commerce company (Stevens, Baker & Co.) in San Francisco. He seemed to be loved and respected by all who knew him.

Capt. Stevens was elected to the Board of Directors of the Merchants’ Exchange Bank of San Francisco in 1872 8 and 1878. 2 He was President of the San Francisco Benevolent Association.

One of Stevens, Baker & Co.’s ships, a brig of 561 tons displacement, was named for Stevens. In 1885, several years after the firm sold the Levi Stevens, it wrecked on a coral reef in the Pacific. All hands were thought lost, but more than 210 days after the ship left port, the captain and crew were rescued by the steamer Alameda. 3

Levi Stevens married Olive R. White (1815–__) in Boston, Massachusetts on October 15, 1837. Together they had five children, with the first four children born in Captain Stevens' birthplace of Truro, Massachusetts, and the last daughter born in California:

There was a dysentery epidemic in Massachusetts in 1849, and Eveleen, Olive Frances, and Levi Thomas all died within 13 days of one another.

Olive married the Rev. Henry Durant Lathrop (September 13, 1829–November 30, 1898) in 1893. It was the first marriage for Olive, but the second for Henry. They had no children together, but Henry had seven children from his first marriage. Sadly, Henry, who was more than 30 years older than Olive, took ill a few years later. He went to Saint Helena near Napa to try to recover his health, but he died there in 1898. 7 One of Lathrop's children, Henry Burrowes Lathrop, taught at Stanford. Another, Helen Lathrop, lived for a time c.1919 at the former Stevens home on Fruitvale.

Amelia married Allen D. Wilson (September 17, 1844–February 21, 1920) in 1895, but they had no children. Allen had come to Oakland as a young man, and worked for Frederick Rhoda as a civil engineer for a few years. He was best known as a geologist. Later he was the president of the Security Bank and Trust Company.

Both Amelia and Olive were annual members of the Fabiola Association which supported Fabiola Hospital.

Stevens had a large estate on Sausal Creek, at what is now 3161 Fruitvale Avenue:

”Near Hopkins’ estate, Captain Levi Stevens’ prestigious estate also backed onto Sausal Creek. The Captain was a connoisseur of exotic shrubs, planting them along the creek’s banks and diverting water from the creek to encourage the plants to grow even more lushly. An anonymous Oakland Daily Times writer described the Captain’s exotic gardens as “the most unique creation… to be seen in a life time,” clearly believing them far superior to the more naturally occurring vegetation: “Fruit Vale Creek runs through this… the banks of which are some 15 or 20 feet high, and usually covered with wild briars and obnoxious weeds. Here these have given place to palms, pines, magnolias, rose-bushes, fuchsias, and all that kind of shrubbery so carefully cultivated in our yards.” The same writer goes on to describe clear, gravel-bottomed pools in the creek, “swarming with small trout.” 1

A September 5, 1954 Oakland Tribune article refers to it as the “old Levi Stevens place". Amelia later lived at the home with her husband Allen WIlson. Olive moved back and lived with them after her husband died in 1898.

Capt. Levi Stevens died "by paralysis through over-taxation of his mental powers" "at Fruitvale" on November 26, 1882. The following day flags at the Merchants' Exchange in San Francisco and other public buildings were lowered to half-staff. His funeral was held November 28 at the Hamilton Church with Rev. Horatio Stebbins of San Francisco conducting the "most solemn and impressive ceremonies." 5 San Francisco Mayor M. C. Blake was one of the pall bears. His obituaries show him to be a gentleman who was much loved and respected by all who knew him.

On August 17, 1926, the Trib noted that "Mrs. Olive S. Lathrop, widow" was then ill at the Fabiola Hospital, and that her cousin Shirley S. Baker had been appointed as her trustee.  A Google search also indicates that a scholarship at Stanford was created in the name of Olive Stevens Lathrop in 1956. Unclear whether this is the same Olive Stevens Lathrop, but it seems likely.