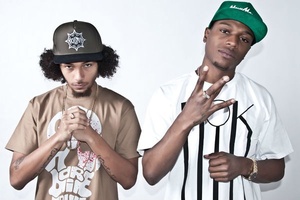 Los Rakas, based out of Oakland, is a musical group comprised of cousins Raka Rich & Raka Dun. From Panama, these guys are both Oakland High grads and talk about how it's not that common to see Afro-Latinos in Oakland. They played at the 2013 Art and Soul Festival and have had sold out shows in Chile and Colombia. They credit Oakland for a lot of their success: youth programs and the DIY culture, especially.

Their music the frontier of a new Latin urban sound, which they call "PanaBay Twist." It's post-reggeaton and incorporates Bay Area rap with Spanish and "more melody." Known for their fresh mix of hip-hop, plena, reggae and dancehall music with both Spanish and English lyricism, Los Rakas represent the cutting edge of Pan-American flows. Los Rakas take their name from the Panamanian word “Rakataka” – a negative slur used to describe someone from the ghetto. They have set out to both inspire fellow “Rakas” by empowering them to become successful despite their circumstances, turning the current Latin hip-hop world on its head. In 2012, Los Rakas released their EP, Raka Love, touring nationally and internationally. They are set to introduce their next project, a double album, "Soy Raka presents: 'El Negrito Dun Dun' & 'Ricardo', later this year.

Los Rakas have gained a big fallowing doing live music shows at clubs, festivals, events and concerts. especially in Oakland and the Bay Area. They are very well known in the local Latin music scene.

The following videos are shot in Oakland. The first features the Scraper Bike Team, and the second includes a collaboration with Turf Feinz.