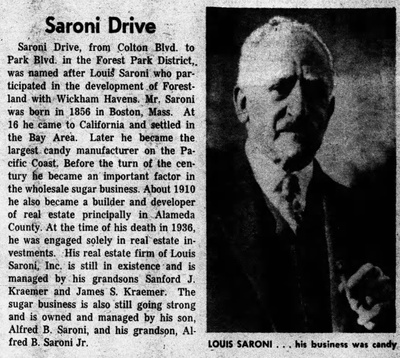 Louis Saroni (August 1858 – December 6, 1936) was the founder of candy and sugar businesses, and is the namesake of Saroni Drive in Montclair.

Saroni was born in August 1858, in Boston, Massachusetts, to Alexander Simon Saroni and Marianne Saroni, the fourth of five children. In 1874, the family moved to San Francisco, and Louis was listed in the 1880 census as a candy manufacturer. (It's not yet known whether this was for someone else or on his own account.) His brother-in-law David Hirschfeld was also listed as a candy manufacturer.

Following the 1906 earthquake, the Saroni family was forced to move, and settled in Oakland for a time.

The family lived mostly in San Francisco, but at the time of Louis' death, he was living in Piedmont. 7

Saroni started a candy business in San Francisco. After moving to Oakland following the 1906 earthquake, the family started a sugar wholesaling business, which coincidentally was the same year C & H Sugar started in Crockett, CA. The family moved back to San Francisco, but the sugar business stayed in Oakland.

The family expanded the business to include rice, and later, other food products. Louis' son Alfred took over running the business, and Louis focused on real estate.