Lowell J. Hardy1 was an early resident of Oakland. Hardy's Woods, Hardy's Pond2, Hardy's Creek3 are all named for him.

He was married to Matilda C. Hardy (Sproule)4, and had these children: Lowell J. Hardy, Jr.5, who is often referred to without the "Jr." in texts, Dexter, Eliza, Franklin, William, George and Mary. In the 1860 census, the Lowell J. Hardy family lives next door to the Marshall Curtis family.

"Lowell J. Hardy, the subject of this sketch, whose portrait appears in this work, was born in Watham, Massachusetts, July 3, 1817, and is the son of Nahum and Mary (Smith) Hardy, and there resided with his parents until the year 1839, when he moved to Indiana, there teaching school in the city of Madison for one season, when he returned to his native place, and there, July 14, 1842, married Miss Matilda Sproul. He now embarked in farming, and was thus engaged up till the time of his departure for California. Leaving home December 15, 1849, Mr. Hardy took passage from Boston, sailing January 25, 1850, and after voyaging around the Horn, came to an anchor in San Francisco Bay on August 6, 1850, the Rod Roy having been considerably delayed on the voyage. Having comfortably located his family at a place then standing at the corner of Clay and Stockton Streets, San Francisco, our subject himself proceeded to the mines, where he remained four months. He next worked at the carpentering trade at wages rating from eight to ten dollars per day, being so occupied until the month of October, 1850, when he purchased one hundred and sixty acres of the Peralta Rancho, but did not obtain legal title for some fifteen years. This property is that on which a considerable portion of the western part of the city of Oakland stands. Here Mr. Hardy has since resided, respected by all his fellow-citizens as an honest upright man. In 1866 he commenced dealings in real estate, which he still continues. He married in the year 1842, as we have said above, and was unfortunate enough to lose his partner by death on October 4, 1865. His family consists of Eliza J. (now Mrs. Holland); Lowell J., Mellium H. Married, secondly, March 30, 1870, Mrs. Mary A. Dillon, a native of Philadelphia."6

"In February, 1852, Oakland was a beautiful plain about four miles wide  from the bay to the base of the hills and about ten leagues long from north to  south. The trees were in clusters and in full foliage and clover covered the ground. The trees were the resort of countless birds throughout the year. The  hills and plains were covered with numerous herds of wild cattle. All this was called Contra Costa at that timeï¿½opposite shore. William Watts ran a small schooner to the landing at Watts' creek, near Temescal, where he had built a small shanty and lived, though his wife kept a boarding house on Mission street in San Francisco. Along San Antonio creek was a substantial grove of evergreen oaks. At Broadway and First streets was the shanty occupied by Horace W. Carpentier, Edson Adams and Andrew Moon, who had staked off streets and laid out lots for a town. Near them toward the Point was another shanty occupied by Lowell J. Hardy. The first hotel was erected in 1851, after the last heavy fire in San Francisco, by Albert W. Burrell. At that time grants were made in this portion of the state by the Mexican Government. Castro's grant was in Contra Costa county, but he later claimed, though unjustly, that his grant extended over the present site of Oakland and it was partly upon this claim that Carpentier and his associates took possession and set Peralta at defiance.

In 1852 there were here about fifty squatters in tents and shanties each holding 160 acres as homesharers. There was no regular ferry. Sloops and skiffs were used to cross the bay. There was a variable populationï¿½here today and gone tomorrow. Malachi Fallon came here in 1852 and bought of Harper a contract for a tract of land from the Peraltas, but Carpentier and his associates burned the Harper tent in his absence and squatted on the tract. Fallon bought ten acres at Oak and Seventh streets on which he built a house and remained though the land was claimed by the others. Harper's land was subsequently held by Colonel Heath and Ned Cohee. Fallon built in the style of a Long Island farm house and when the floor was laid went for his family, but during his absence the belligerent squatters jumped his property and compelled him in the end to pay $1,000 for a release; one piece of native woods here was called Hardy's Woods. Malachi Fallon had the first lath and plaster house in Oakland."7 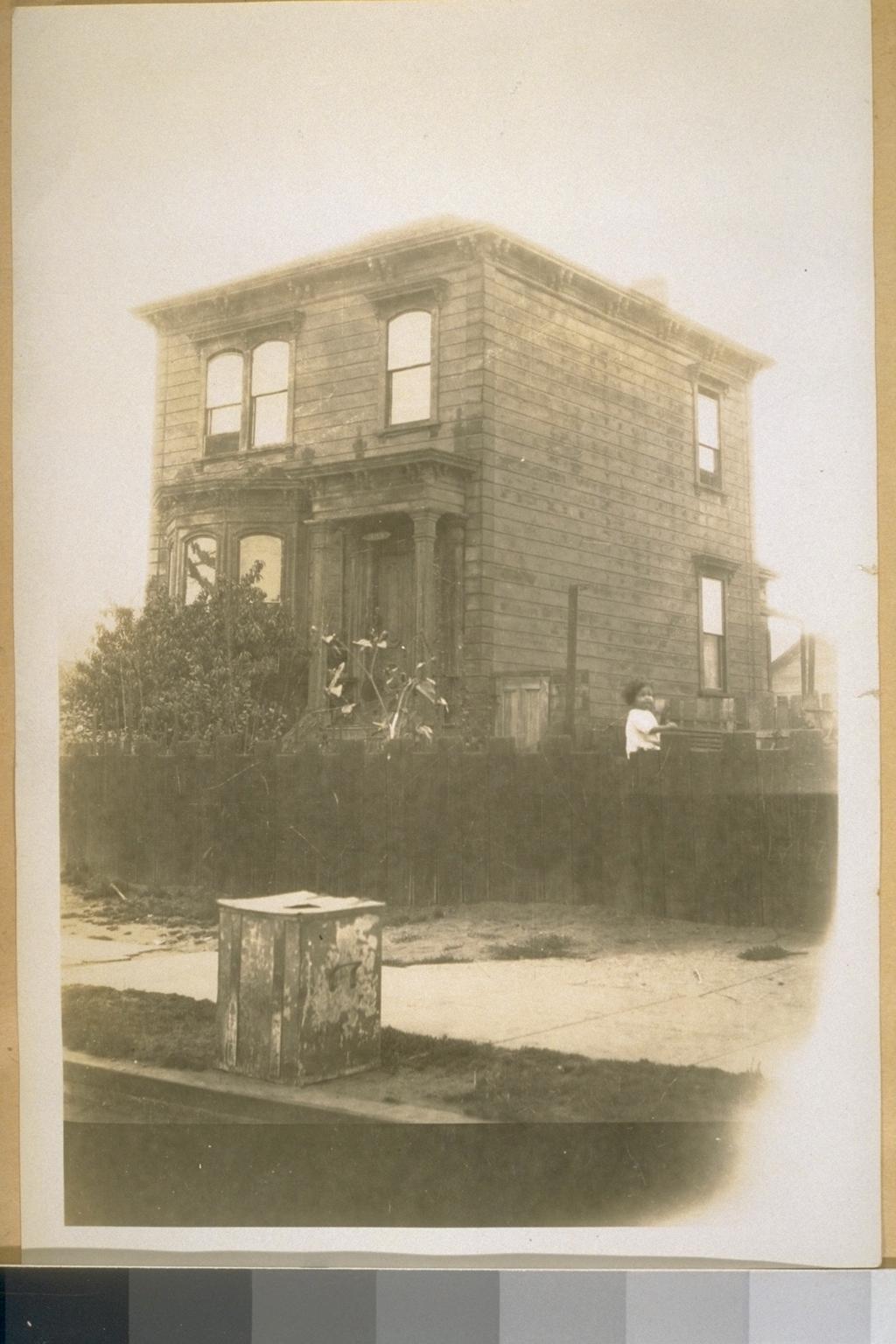