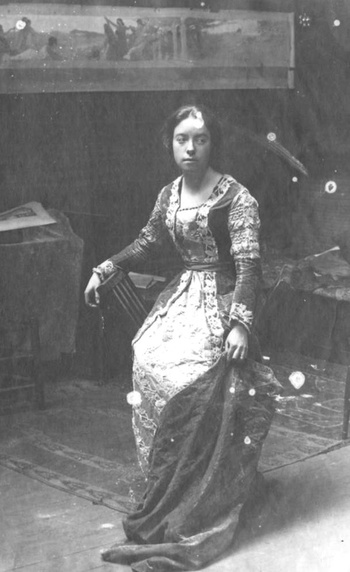 Born in San Francisco, California on August 29, 1870, Lucia Mathews began drawing at an early age.  After one year at Mills College, she enrolled at the Mark Hopkins Art Institute where she studied with Arthur Mathews.  A romance blossomed and they were married in 1894.

The couple went on to become one of the most influential and important art forces in turn-of-the-century San Francisco.  They were the leaders of the California Decorative Style, which was the West Coast expression of the Arts and Crafts movement.

In 1899 she studied in Paris at Académie Carmen and was influenced by Whistler. After the fire of 1906, their workshop was at 1717 California Street where their tremendous output included murals, paintings, furniture, frames, candlesticks, and other hand-crafted and hand-painted objets d'art.  Her furniture was often decorated with floral motifs in an oriental design; whereas, her husband's was in the more classical Beaux Arts style.

After the fire, they started a magazine, Philopolis, which they both wrote and illustrated.  A resident of San Francisco until 1951, Mrs. Mathews then moved to her sister's home in Los Angeles where she remained until her death on July 14, 1955.