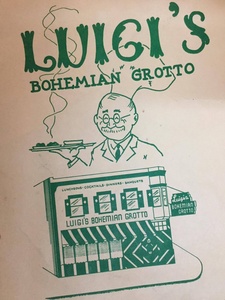 Luigi's Bohemian Grotto was a small, family-run restaurant at 200 Broadway near Jack London Square. It was open from at least 1939 to 1967.

The namesake was Luigi Cabiale, who cooked and ran the restaurant along with his wife, Dorothy Cabiale. Their daughter Lisa Cabiale (O'Connor) was frequently there, too.

"In the mid 1940s my parents would go to Luigi's a lot. It was my favorite place to have dinner. I remember going their for my 6th birthday and having the thrill of Chef Cabiale bringing me a little dish of spumoni ice cream as a birthday treat. He was a very sweet man. Although it's been over 70 years ago, it is still a very fond memory." 1

In 1956, Luigi took on a partner, Joe Mainero, in part so he could take Dorothy on a vacation without closing down. 3 In 1957, two couples, Louise and John Zimmerman, and Josephine and Arduino Serena came in to help run the restaurant. 4 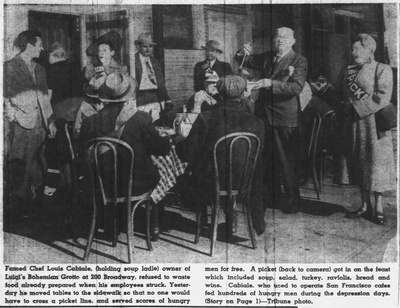 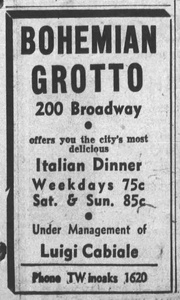