Luther Burbank Elementary School (also called Burbank Elementary School) was a K-6th public school located in the Millsmont neighborhood of East Oakland and was a part of the Oakland Unified School District (OUSD). The school, which opened for the 1950-51 school year and was dedicated on November 15, 1950, was named after Luther Burbank, a botanist and horticulturist who made his home in Northern California. 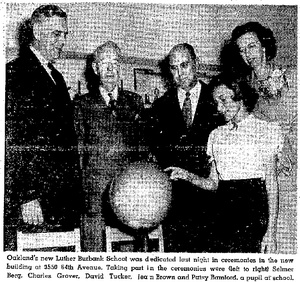 The school’s colors were Green and Yellow.

The mascot was the Beavers.

The school song was:

School Closure
Burbank was closed by the Oakland Unified School District in 2004.

The following fall, East Oakland Community High School was opened on Burbank’s campus and was later moved to King Estates, where it was subsequently closed by OUSD.

Explore Academy, a middle school, was opened the next school year on Burbank's campus.  The OUSD School board voted in Dec 2009 to close Explore Middle School at the end of school year because of low enrollment.