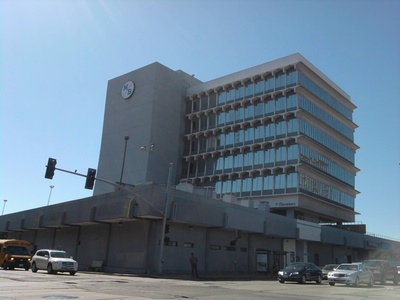 The MacArthur/Broadway Shopping Center opened to much fanfare on September 9, 1965. Located in North Oakland, the enclosed mall was considered “A whole century ahead of its time … The most fantastic one-stop shopping and dining extravaganza in the entire universe!”

One of the best features of the mall was The Hamlet, an early food court similar to the Emeryville Public Market, which had 15 restaurants, one restaurant for each of the major ethic foods of the time: Chinese, Japanese, Italian, Mexican, American, German and Sea Food, Smorgasbord, Hof Brau, as well as the Pine Tree Candy shop. Mr. Bo's had American food (chicken fried steak, Salisbury steak, etc. ... similar to the old various of the Kerry House on Piedmont Avenue), 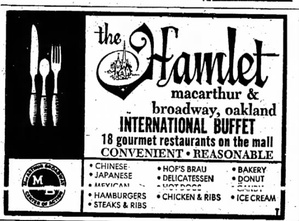 The Oakland Tribune of December 6, 1969 included an M/B Center ad that mentioned:

The Woolworth's was an especially large variety store that even included a coin-collecting section and a pet supply section with live aquarium fish for sale.

The upper parking lot had interior pedestrian access via a set of smooth-surface (rather than stepped) escalators. The shopping carts at the center had strong magnets hanging down from their wheel axles, along with grooved wheel treads that fit into the groves on the escalator tread. This enabled shoppers to safely take loaded shopping carts up the escalator.

The MacArthur/Broadway Center was home to one the first shopping mall movie theater in the East Bay, the plush Theater 70, which opened in the mid-1960's/1970. There were two entrances, one inside the mall and the other on the outside, at the intersection of MacArthur Boulevard and Howe Street. The address of Theater 70 was 255 West MacArthur Boulevard, though it was later renamed Cinema 1. In 1977 the theater closed permanently. 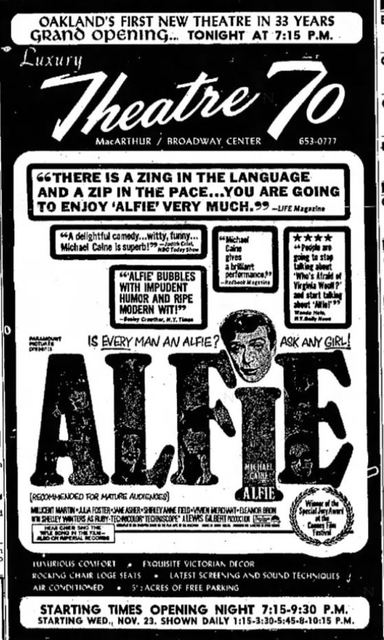 Once the go-to destination in North Oakland, after several decades the M/B Center became run down and dangerous. In 2009 the MacArthur/Broadway Shopping Center was demolished for a future Kaiser Permanente hospital.

The mall was built on the former location of the Mayfair Supermarket, itself formerly the Andrew Williams Store. 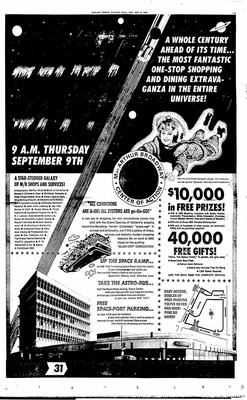