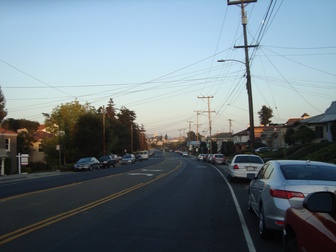 MacArthur Boulevard is a major west-east (in Oakland-lingo; more accurately Northwest-Southeast) artery that extends from Hollis Street / I-580 (just west of San Pablo Avenue ) all the way to about Joaquin Avenue in San Leandro, roughly following the base of the Lower Hills. The segment of MacArthur between the MacArthur Freeway and Fairmount Avenue is known as West MacArthur Boulevard. 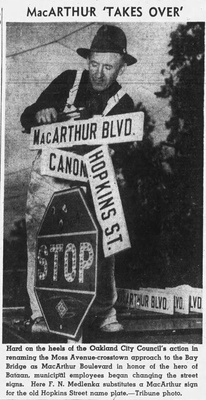 Although many people assume that MacArthur Blvd. was created after World War II, it was actually created during the height of the War. The idea was first proposed by Oakland sign foreman, George Lynch, in March 1942, at about the same time as General MacArthur's famous "I will return" speech, and was quickly approved by the Oakland City Council at their meetings of March 19 and April 8, 1942. They wasted no time, and by April 11th were changing the street signs. 2

MacArthur and West MacArthur were stitched together as a single roadway named after General Douglas MacArthur during World War II from various shorter streets, with a few newly created connections:

Until the completion of the MacArthur Freeway in 1966, MacArthur and West MacArthur Boulevards formed part of U.S. Route 50, a major cross-country highway connecting Maryland to California which was a principal route of entry to Oakland and San Francisco from points east. This explains the large number of motels from the 1930s, 40s and 50s that can be found all along MacArthur. 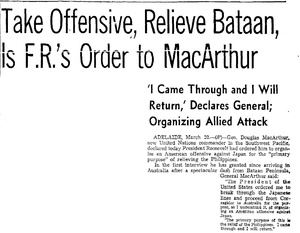 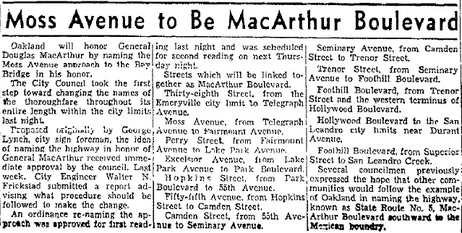