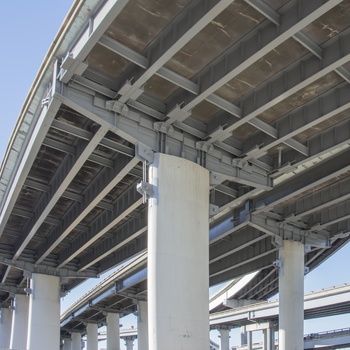 The MacArthur Maze, often simply called The Maze, is the large freeway interchange located near the eastern end of the Bay Bridge which links Interstate 80, Interstate 880 (the Nimitz Freeway) and Interstate 580 (the MacArthur Freeway).

It’s also reportedly the world’s largest freeway interchange. If so, it’s easy to see why: few other similarly densely-populated places face the engineering challenge of routing massive amounts of traffic through/to a single access point (the Bay Bridge). It’s not like one road leads to/from this bridge!

The Maze was originally constructed in the 1930s in conjunction with the November 1936 opening of the Bay Bridge. When it first opened, the main access route leading into the Maze was U.S. 50 running along a convoluted set of streets including 38th Street, Moss Avenue, Excelsior Avenue, Hopkins Street, Camden Street, and Foothill Boulevard. This convoluted route was somewhat simplified with the creation of MacArthur Boulevard along much of this same route in the late 1940s. The Maze was then expanded in 1955 to prepare for the connection of the MacArthur Freeway, the Cypress Structure (the Cypress Street Viaduct), and the Eastshore Freeway. The Maze was further expanded after the 1989 Loma Prieta Earthquake, following the tragic collapse of the Cypress Structure.

Calling it a 'maze' actually predates the opening of the bridge in November 1936 by a few months. 1 The 'MacArthur' part didn't come until the creation of MacArthur Boulevard in 1942. Officially the structure is called the East Bay Distribution Center. 2

Some people include the nearby 24-580-980 Interchange when talking about The Maze, but that wasn't constructed until more than 30 years later. A 1968 Tribune article referred to the collective mess as a "rat maze" and described them as a death trap because of the numerous accidents. 3

JAMMI (Just Above the MacArthur Maze Interchange) is a neighborhood deriving its name from The Maze.