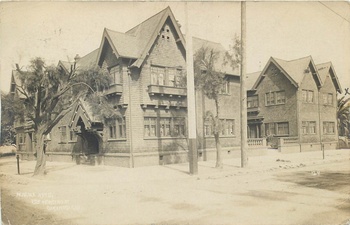 c.1909 postcard from eBay fair use

The Magill Apartments were an apartment building on the northwest corner of Castro and 13th, constructed in 1909 for Percy Magill. The area is now part of the 980 freeway.

The drawing accompanying the article announcing the construction shows a different building. If the other facts in the article are correct, the building was designed by J. Cather Newsom, and included Marshall and Stearns wall beds, but the text seems to describe the building in the drawing. A c.1909 postcard labeled Magill Apartments shows a much smaller H-shaped structure, which matches the 1912 Sanborn map.

Questions: Did Magill have multiple buildings? Was the building shown and described actually constructed? I don't see it on 13th near Castro. 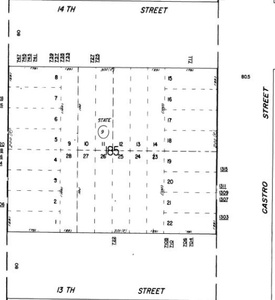 Add a captionAnswer?:  I believe the apartment house described in that article, and shown in two very different drawings published a week apart, was to be constructed on the vacant lot to the west of the corner building shown on the postcard and the Sanborn map. Note that the article says the building will be near Castro, not at Castro. Also note this 1911 mortgage they took out on a piece of property that was on the north side of 13th and 90 feet west of Castro, matching this excerpt from the Assessor's map for the area. No clue why the building doesn't show on the Sanborn maps for the area. Not built? Burnt down? 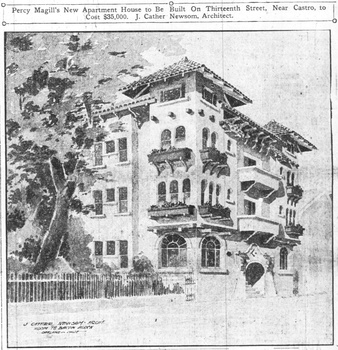 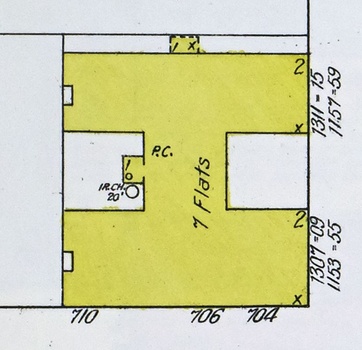