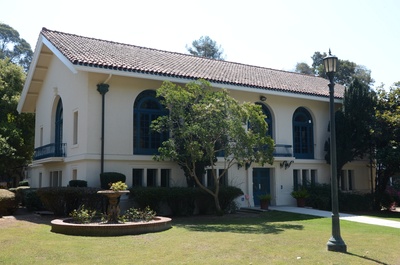 The Margaret Carnegie Library building at Mills College was built in 1905-1906 using a $20,000 grant from businessman and philanthropist Andrew Carnegie. The building was designed by Julia Morgan, and named for Carnegie's daughter, Margaret Carnegie. 1

Julia Morgan designed the symmetrical Mission style building with five tall arched windows on the second floor, three on the first and one on each side.  Featured is a red tile roof accented with iron balconies.  The interior has exposed wooden beams, just as in many of Morgan's Arts and Crafts style buildings.

The building has not been used as a library since 1989. It currently houses administrative offices and is known as Carnegie Hall.