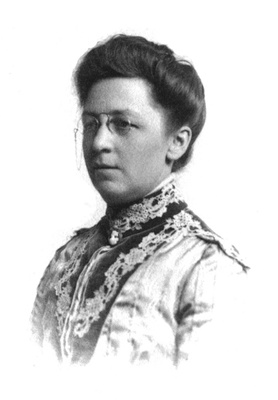 Margaret Wythe, 1904
courtesy BBoveeDr. Margaret Wythe (December 21, 1858 – July 6, 1946) was a physician and a teacher. She's especially remembered for organizing a quick, efficient response following the 1906 earthquake and for relief work during the 1918 Flu Pandemic.

Wythe was born in 1858 in Port Carbon, Pennsylvania, to Dr. Joseph Henry Wythe, a pastor and physcian, and Jane McHenry (Wythe). The family came to California in 1862, moved several times, then came to Oakland in 1875. Dr. Joseph Henry Wythe was a trustee at Mills College. Margaret Wythe graduated from Oakland High School in 1878.

In 1879 she was elected to teach in the Oakland schools. In 1887, she was teaching at Lafayette Elementary School. In 1889, she became an assistant in the science department at Oakland High School, where she taught botany, zoology, physiology, hygiene and physical geography. She taught at OHS until 1910.

Following the 1906 earthquake, Wythe organized a quick response for refugees at First Methodist Church where she was a member:

"At First Church, relief work was organized by Dr. Margaret Wythe, who demonstrated a positive genius for administration work. An organization was set up within 12 hours. Within that time meals were served hungry multitudes, and the auditorium of First Church took on the appearance of a dormitory. The stains on the carpets and mars on the woodwork were scars of glory. It was worthwhile to see our refined and cultured young ladies rise before dawn to work on the early shifts during those strenuous days. They were relieved late in the day by a second group, and the second group by a third group. They worked around the clock." 1

She graduated from the Oakland College of Medicine and Surgery in 1915 and was granted her medical license in 1916. 2