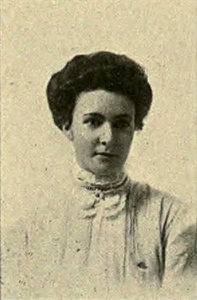 Ogden was born in September, 1888, in Oakland, to Frank B. Ogden and Laura MacDonald (Ogden). She graduated from Oakland High School in 1906.

She was an undergraduate at UC Berkeley from about 1907 to 1910, where she met her future husband, Francis Steele. Both worked on the student newspaper, The Occident. 1,2 After her graduation in 1910, Ogden served as assistant dean of women and department secretary. 11

She then studied law, received her J.D. degree in 1913, and passed the bar to practice law in federal courts. 8 Her thesis for her Juris Doctor was titled "An Examination of Recently Judicated Questions in the Law of Persons". 5 She was the first woman to practice law in the Alameda County courts. 9

Ogden and Steele married on June 30, 1918, at the First Presbyterian Church. Their marriage was a "social event of considerable importance".

Tragically, Ogden died on December 2, 1918, one of the many victims of influenza. This was just a few months after her father died, and 5 months after she married Francis.

Ogden served on the Oakland board of education. 4,6,12The California Monthly says an Oakland school was named for her after her death 3; the Oakland Tribune also says it was to be done, 10 but at the time the board declined to name new schools after "local personages." 13

Marguerite is buried in plot 2 at Mountain View Cemetery in the Ogden family grave. 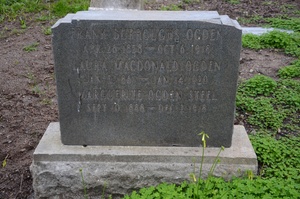