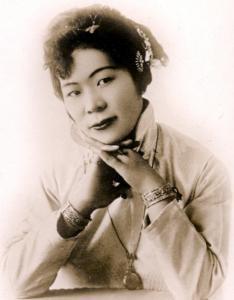 Marion Wong (1895 – 1970) was the first Asian American film-maker and one of the first women film-makers. She was third-generation Chinese American and came from an upper-middle class family that ran Edwin's Café in Oakland. Wong was born in San Francisco, but grew up in Oakland as the youngest of five children.

In 1915 and 1916, at the age of 21, Wong directed and starred with her sister-in-law, Violet Wong, in a silent film called "The Curse of Quon Gwon". It was filmed in Oakland (plus some outdoor scenes in Niles Canyon.) To put together the production, Wong formed the Mandarin Film Company with financial backing from her uncle, Ben Lim. Many of her family members acted in the film, produced the costumes, and did the hair and makeup.

In 2006, the film was "recognized as a culturally, historically and aesthetically significant film by the National Film Registry." 1 Despite being made by a newcomer to film and the film industry as a whole being in its infancy, it has excellent cinematography and uses many of the film techniques that were just being developed. It is also an interesting look into the mixing of cultures, with the conflicts between American-Born Chinese and those from more traditional backgrounds.

Upon its release, a local newspaper described the film:

"OAKLAND, May 11.—Los Angeles may be the center of the motion picture world, but Oakland has the honor of producing the first Chinese film drama, acted entirely by Chinese, produced by Chinese with with Chinese scenery, and Chinese costumes designed by Chinese, and with a love tale running through it written by a Chinese girl. Mary K. Wong [sic], talented niece of Lim Ben, wealthy Chinese merchant and landowner, is the maid who is responsible for it all. She conceived the idea, wrote the play, designed the scenery and costumes, drilled the actors, directed the filming of the production, managed its details—and took the leading part. The Oriental drama—called by its creator the Mandarin Photo Play—was filmed near Hayward. There are seven reels of it. Miss Wong is the villain. Her sister-in-law, Mrs. Violet Wong, one of the prettiest Chinese girls in Oakland, is the beloved one of the play. There are thirty Chinese men and women in the cast. “I had never seen any Chinese movies,” Miss Wong said today, “so I decided to introduce them to the world. I first wrote the love story. Then I decided that people who are interested in my people and my country would like to see some of the customs and manners of China. So I added to the love drama many scenes depicting these things. I do hope it will be a success.” The film is to be given its first production at the Kinema Theater tomorrow morning—a private production for the benefit of Miss Wong and her friends. This is not the first time Miss Wong has brought her race to the attention of the Americans. She recently surprised her white sisters by appearing in concert, singing operatic airs in English and Italian. She was for a time a student at the University of California, where she took up special work."

The film was screened two times at the Kinema Theater, but was never bought by a distributor. With no financial returns on the film, Ben Lim declared bankruptcy. Following this Wong asked the family never to speak of the film again.

After her foray into film, Wong worked in her husband's restaurant and cabaret, The Singapur Hut, as a performer. Her career as an artist sharply declined by the 1930s as her time and work refocused toward motherhood. Wong passed away in 1970.

This was the only picture Wong ever made, and in fact, she never mentioned the film to her children, who did not know about this work until two of the film's eight reels were discovered in a basement. These reels are currently featured at the Oakland Museum of California.

Her work was featured in "Hollywood Chinese", a 2008 documentary on the portrayal and treatment of East Asian characters and actors in Hollywood.

The film was digitally restored and a new music score created (the original was silent). Some parts of the film were lost to deterioration, but fortunately Violet Wong's grandson, Gregory Mark, had a 16mm copy of the film made in 1968, and between various sources much of the film can still be seen.