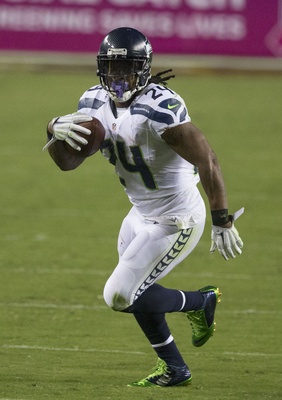 "Marshawn Lynch vs. Redskins 2014" by Keith Allison - Flickr. Licensed under CC BY-SA 2.0 via Wikimedia Commons.Marshawn Terrell Lynch (born April 22, 1986) is an NFL running back from Oakland. His nickname is "Beast Mode" for his aggressive running style and ability to break tackles.

He went to Oakland Tech and UC Berkeley before playing in the NFL. Lynch was a 4 sport athlete at Oakland Tech, and played basketball alongside future Cal star Leon Powe.

"I've learned a lot of lessons in Oakland," said Lynch. "I've seen many come and I've seen many go. Oakland has really just taught me about life. I feel that I'm proud of my city. I feel like [without it] I wouldn't have been the man who I am today. I've had ups and downs and I've been able to overcome them just because I feel like being from Oakland I've had to overcome so much. 1