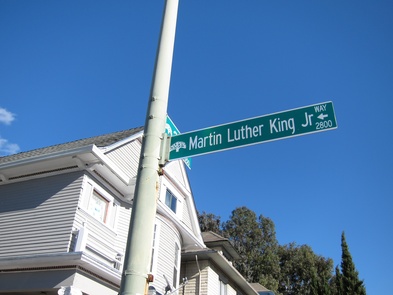 Martin Luther King Jr. Way (formerly known as Grove Street) is a major street in Oakland and Berkeley, California that begins just southwest of the Embarcadero.  When the street crosses Codornices Creek in the Northbrae section of Berkeley, the name changes to The Alameda. The segment in Oakland between 52nd Street and the Berkeley border (between 61st and 62nd Streets) is the widest street in District 1 and is designated as an arterial street.

The City Council of Berkeley changed the name of Grove Street within the Berkeley city limits to Martin Luther King Jr. Way by resolution on November 8, 1983.  (Resolution 52,001 N.S.).

According to Wikipedia, "Grove Street, which stretched for several miles north from Downtown Oakland into North Berkeley, was renamed Martin Luther King Jr. Way in 1983-4. The street had once represented the dividing line between neighborhoods where minorities could and could not live or buy property." (Needs to be verified)