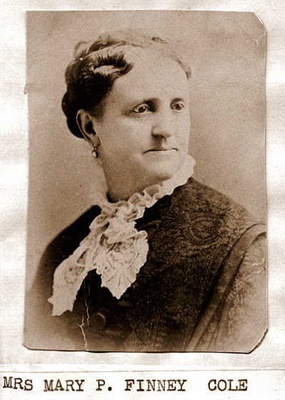 Mary Philanda Finney Cole was born January 29, 1827 in Mexico, New York and died in Oakland, CA on June 19, 1910. She met Rector E. Cole In Oberlin, Ohio where her uncle, Charles Grandison Finney was the second president of Oberlin College of Ohio. She and Rector were married by her father, George Finney on October 6, 1847 in Haverhill, MA,  She and her husband Rector arrived in San Francisco in October of 1849 and moved to Oakland in 1856.  She was one of the first 11 members of the First Congregational Church and active in social causes.

Mary's siblings were Sarah L. Finney (Butters), Cyrus George Finney, Ann Eliza Finney, and Lydia E. Finney.  Her sister Sarah was the mother of Henry A. Butters who died at her Berkeley home in 1908.