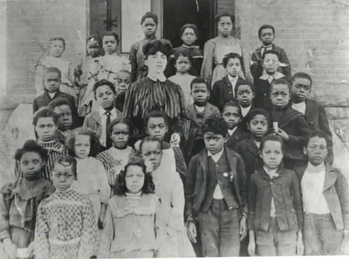 Mary Jane Sanderson-Grases (October 1851 – September 14, 1933) was the first Black school teacher in what is now Oakland, and the daughter of Rev. J. B. Sanderson.

Sanderson was born in Wareham, Massachusetts, to Jeremiah Burke ("J.B.") Sanderson and Catherine Molyneaux (Sanderson), in October, 1851. She was the second oldest of 8 children, and came to California with her mother and siblings about 1861 to join J.B., who was teaching in San Francisco.

From 1867 to 1871, she was the teacher at the Brooklyn Colored School. Brooklyn wasn't annexed by Oakland until 1872.

In 1940, Kate was still living at 580 - 32nd Street, but now with her cousins, William Peyton Sanderson, and William's daughter, Vivian Sanderson (O'Reilly) and her family.